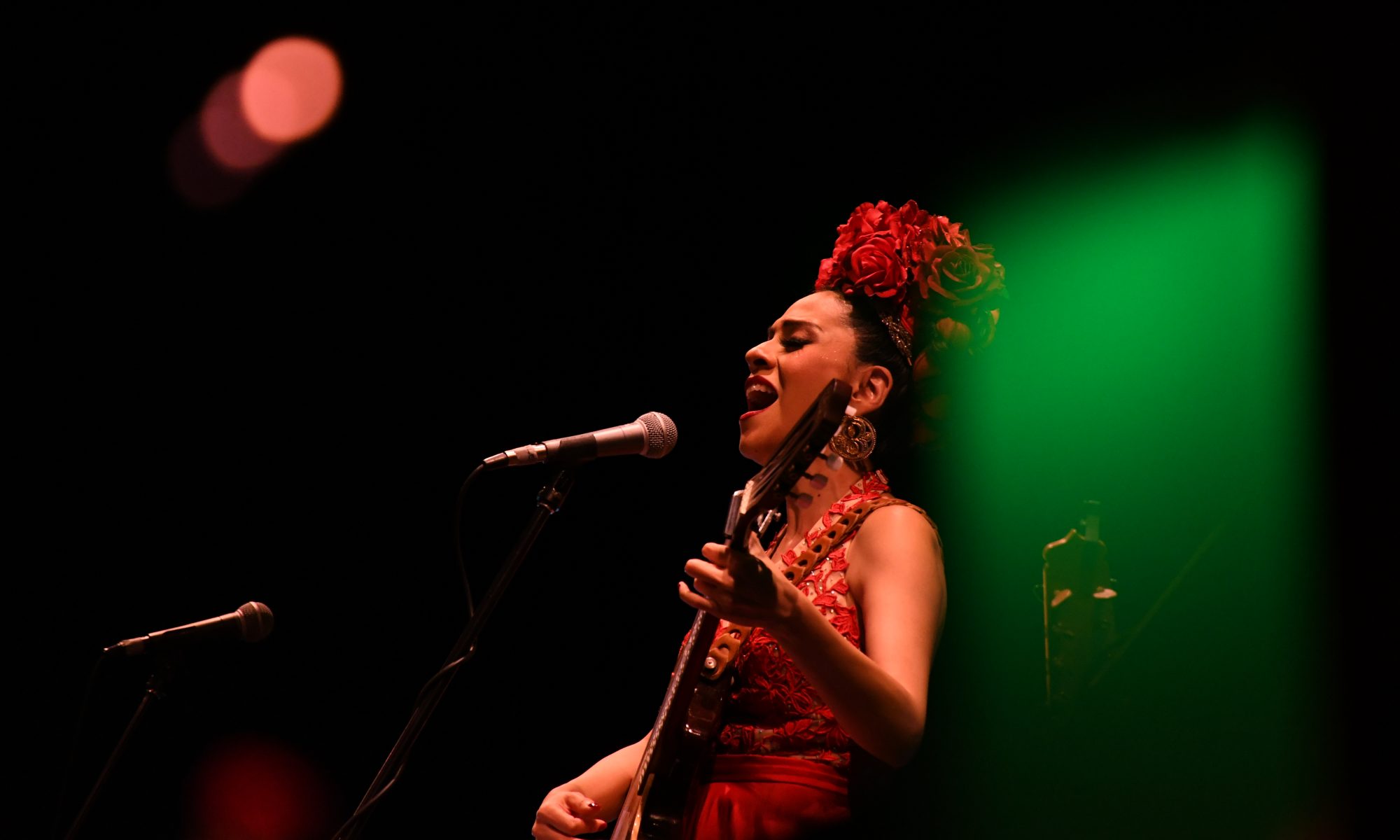 patrons of the concert and the theatre staff awaited patiently as final touches on the concert floor were put on and the mics were put up.

Azul Barrientos, an artist originally from Mexico City, is the artist in residence at the Esperanza Peace and Justice Center. The sounds of the generation’s before her’s past is what resonated in that theatre on September 16, 2018, and now, a month later, I am able to share in the experience that was the Azul concert.

The concert hall was dark when I entered. There seemed to be a sense of accomplishment in the eyes of the staff that was walking around getting finishing touches taken care of but don’t take my words lightly, there was a

great sense of urgency.  Spotlights flooded the great red curtain that covered the stage and smoke from the background protruded from under the curtain. I wondered where Azul was when the music would start but the preparations were still underway and the crowd was enjoying their time in the lobby/gallery

The lights came up a bit and the dim was brought back up to help patrons to their seats. There had to have been well over 200 guests present but it was a bit hard to eyeball.

This would have been my first time hearing Azul sing. Honestly, I had only heard of Azul a few days before because of the Facebook post that was listed online but I was excited to see a local artist. The show began with the folklorico group from Austin, Texas. The group was dressed in traditional

folklorico dresses that originated in several parts of Mexico including Oaxaca and Guanajuato as well as from the major city of Guadalajara in the state of Jalisco. The group danced some traditional songs and settings, many of which were done barefoot. Imagine the sound of soft puddles of water being struck by the passing wheel of a vendor in the street of a small pueblo. The whooshing sounds of their feet hitting the stage set a mood for the concert to come. Tradiciónes y la cultura (tradition and culture) were clearly now in the air. It was beautiful. It was historical. It was something I had never heard before.

As the group left the stage I was a bit more enticed by the show. My family and those who know me are aware of my love for the culture that is sustained in mariachi music, Folklorico, flamenco, and other Mexican cultural arts and this feeling of awe left me speechless.

“…this feeling of awe left me speechless.”

I took some shots of the group leaving and happened to grab some of them in the lobby as well to share later while I imagined how the show would continue to captivate.

The red cloth began to move from center to the respective sides. It was interesting to think about. For years this red curtain has presented so many cultural, local, and political minds that it was somewhat the curtain that paved the way for a new beginning. Azul stood there, in a white dress with red

accented roses. This particular dress was a ball gown and flowed as if it fit on her the way Cinderella’s glass slipper slipped right on her. Azul began singing and the overzealous crowd quickly found themselves quieter than calm before the storm.

The strum of her guitar to the tunes of the folk Mexican music beat the heart of every patron.

I just remember the lyrics of one of my personal favorites, Un Mundo Raro, by Jose Alfredo Jimenez as she played the beloved song. I continued to shoot. Shot after shot reminded me of the early moments of my childhood when my grandma would show me the words of the Spanish language as well as the songs that I was hearing at this concert.

Azul continued her concert and my grandma and I enjoyed every song that was performed with heart and soul. I left that day with a reminder that the reason I continue to study in this field of history is that of the nostalgia that it brings me. To remember what was once a faint memory as a recent ripple in the pond that is my life is important. I guess you could say it adds the reference to my story. The culture of these events has changed history worldwide. Locally, artistas like Las Tesoros de San Antonio has changed the landscape for music in San Antonio and they all started here in San Antonio. Azul lives a legacy. Azul Barrientos shares the generational love that was passed down to her in music by her family and those who study history like

myself are, in many cases, passing down a deep concern for the past and a meaning for the future. Importance floods our work and will continue to do so here.

The music and culture have transfigured San Antonio and will continue to do so. Each major quadrant of our city has a club or dance venue of some sort. If not one, then many of them. These clubs and venues have changed over the years as well just based on the population around them but what hasn’t changed is the beauty that the culture brings and the history that the culture continues to carry along with it. This concert was just one reminder of where the culture and history of our people meet and mend the surrounding community.